UPDATE, 1:30pm: Although NOT a party to the new suit re: the election audit, the @MaricopaCounty  Supervisors will hold an EMERGENCY meeting at 2pm to discuss Judge Coury's temporary pause/etc, and their next steps. 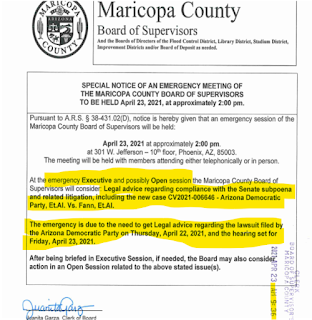 UPDATE, 4/23: Here is our play-by-play coverage of this morning's hearing. We were joined by elections professional @ThePolitiKat. (Click on the embedded tweet to show all of the coverage in a separate window):

LIVE TWEETING coverage of the Order to Show Cause hearing on the @azdemparty / @Steve_Gallardo lawsuit against @ArizonaAudit starting at 11am.

The SUMMARY: Judge orders temporary halt of @ArizonaAudit/recount between 5pm today and noon on Monday, in order to allow parties to brief issues of (1) legislative immunity, (2) separation of powers, and (3) standing. Plus, the @azdemparty must post a $1M bond today to stop the audit. (In case it is found they wrongly brought this suit and caused damage to the Senate's/Ninjas' audit.)TODAY, get blue pens off of the audit floor, protect secrecy.

UPDATE, 4:45pm: A hearing on the Democrats'/Gallardo's Motion for a Temporary Restraining Order to stop the election audit has been set for TOMORROW at 11am in front of Judge Coury.

The Complaint was initially posted by KPNX (Channel 12) and is reproduced below.

The suit names State Senate President Karen Fann, Sen. Warren Petersen in his role as Chair of the Senate Judiciary Committee, former Secretary of State Ken Bennett in his role as the State Senate's liaison in charge of the audit, and the lead contractor Cyber Ninjas.

The Complaint alleges that state law forbids the private auditors from looking at voters' confidential registration and voting records, which includes signatures, private information, and how (i.e. the method) in which they voted in November. It further alleges that they may not possess voted early ballots and the tabulation equipment.

The Plaintiffs also note that the auditors were not required to take an oath before taking control of the subpoenaed information and equipment and that they are not trained in signature verification.

The equipment and ballots are already in the process of being delivered by Maricopa County to the auditors at the state-owned Veterans Memorial Coliseum.

The case has been randomly* assigned to Superior Court Judge Chris Coury, who enraged Democrats last year with a ruling that would have removed the Invest In Ed ballot initiative from that November ballot. The Arizona Supreme Court reversed the decision, but Democrats led an effort to remove Judge Coury from the bench... on that November ballot.

(This is a developing story. Please check back for analysis and more details.)

*There are 22 judges in the Civil Division of the Maricopa County Superior Court.

AZ Law airs on non-profit Sun Sounds of Arizona, a statewide reading service that provides audio access to printed material for people who cannot hold or read print material due to a disability. If you know someone who could benefit from this 24/7 service, please let them know about member-supported Sun Sounds. And, YOU can donate or listen here.
Previous episodes of AZ Law can be streamed or downloaded here, or wherever you get your podcast.
at April 22, 2021