UPDATE, 10/2: The Supreme Court announced this morning that they have accepted the Arizona ballot harvesting case. Thus, the ban on allowing groups to pick up and deliver ballots remains in place.

As the nation prepares for the burial of Supreme Court Justice Ruth Bader Ginsburg and the nomination of her replacement, the remaining eight Justices are set to consider not one, but two, Arizona election law cases on Tuesday. Depending on what the Court decides this week, Arizona could be in for an "October surprise". 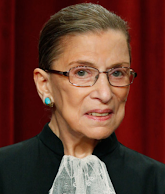 The Ruth-less Court is not hearing oral argument on the cases, but deciding - behind closed doors - whether or not to accept the cases for decision. Besides the Arizona impacts, both potentially could impact election laws across the country.

In the more widely-watched case, Arizona's so-called "ballot harvesting" law is at issue. The Ninth Circuit found that the Arizona Legislature had discriminatory intent in passing the law that prohibits people and groups from collecting and turning in voters' early ballots. (There are limited exceptions for family members, care givers and others.) The Ninth Circuit granted a stay on its decision as both Attorney General Mark Brnovich and the Republican National Committee appealed, so the prohibition remains in place pending "final disposition". (The Stay Order is re-published below.)

It is very possible that the Supreme Court will accept the case. However, IF the Supreme Court denies certiorari shortly after the conference, that would end the stay and remove the ban from the books. In this election - where more than 3/4 of Arizonans will get (requested) early ballots in the mail in just two weeks - that could scramble everyone's GOTEV* efforts.

The other case the Court will be conferencing about on Tuesday is about this year's election, but would only impact future situations. Arizona Governor Doug Ducey was sued for not calling for an earlier special election to fill Senator John McCain's seat after his passing in 2018. The Legislature had passed a law which permitted Ducey to appoint first Jon Kyl and then Martha McSally to the seat. The Special Election is being held this November 3, more than two years after McCain's passing.

The constitutionality of the statute was at issue in the Tedards case, and the plaintiff sought to move up the special election. The plaintiff lost at both the District Court and 9th Circuit levels, and it would be a surprise if the Supreme Court decides to hear this case.

*"Get Out The Early Vote"

UPDATE 9/23, 1:45pm: Judge John Hinderaker was CONFIRMED by the U.S. Senate this afternoon, on a 70-27 vote. As expected, the vote was topsy-turvy, with almost all of the opposition to President Trump's nomination coming from Republican Senators. Both of Arizona's Senators voted "aye". (See below for statement.)
This is a developing story and will be updated as warranted.
(UPDATE 9/23, 11am: This morning's cloture vote confirms the topsy-turvy nature of the Hinderaker nomination. Republicans cast 22 of the 26 votes against moving forward on the nomination, and Democrats' votes contstituted 42 of the 71 aye votes.)
UPDATE, 9/23, 9:35am: The Senate voted 71-26 to close debate on the Hinderaker nomination. The vote to confirm him will take place this afternoon.
President Donald Trump's nomination of Tucson Judge John Hinderaker to the District Court bench heads to the Senate floor on Monday after topsy-turvy behind-the-scenes maneuvering.

The Pima County Superior Court jurist was nominated for the lifetime position nearly one year ago. It has been stalled since March, after the Senate Judiciary Committee recommended his confirmation on a 16-6 vote. However, the six "no" votes all came from Republican Senators, apparently led by Missouri Senator Josh Hawley and concerns regarding the Second Amendment. Yesterday, Senate Majority Leader Mitch McConnell filed the cloture motion to move it to the floor.
Sen. Kyrsten Sinema (D-AZ) tells Arizona's Law that she is "pleased" to see the nomination moving to the  vote next week. “Judge Hinderaker brings to the bench a wealth of legal knowledge, decades of litigation experience, and a stellar reputation for integrity and fairness. I’m pleased the White House worked with me to advance his nomination.”
If Hinderaker is confirmed next week, it will mean that Arizona's District Court bench will be at full strength for the first time in recent memory. Arizona's Senators did introduce a bill to increase the size of the Arizona bench, but it has not moved forward.
(thanks to Judicial Nominations Blog for the heads-up)
"AZ Law" airs on non-profit Sun Sounds of Arizona, a statewide reading service that provides audio access to printed material for people who cannot hold or read print material due to a disability.
If you know someone who could benefit from this 24/7 service, please let them know about member-supported Sun Sounds. And, YOU can donate or listen here.
"AZ Law" can also be downloaded and subscribed to in all major podcast stores - iTunes, Google Play, Spotify, Podbean, etc.
at September 18, 2020 No comments:

Sidestepping the issue of Kanye West's registration as a Republican in Wyoming, the Arizona Supreme Court nonetheless kept him off of Arizona's November 3 ballot. They instead based today's decision on the fact that the rapper/celebrity had not filed the legally-required Statement of Interest before collecting signatures to be placed on the ballot. That statute was recently enacted by the State Legislature.

The court challenge to West's last minute effort to get on the Arizona ballot was primarily based on the fact that both West and his slate of electors (for the Electoral College) were registered as Republican, and that he could thus not get on the ballot by collecting signatures as an independent candidate. The issue of the Statement of Interest became an after-thought, and the trial court judge did not address that requirement in his ruling last week.

Musician/celebrity Kanye West cannot appear on Arizona's ballot for President in November, a judge ruled this afternoon.
Maricopa County Superior Court Judge Scott McCoy heard oral argument, questioned the attorneys for both sides, and determined that because West is registered as a Republican, he cannot petition to be on the ballot and avoid the usual party primary system.

Kanye West has filed to run for President on the November 3 ballot in several states, running on the (newly-formed-yet-ubiquitous) "Birthday Party". He has made some references to still being supportive of Republican President Donald Trump, and many of the vendors and attorneys assisting him in various states have ties to the Republican Party. Here in Arizona, attorney Tim LaSota represents West; he has been counsel for the Republican party and many Republican candidates and groups.
The challenge to West is based on the surprising facts that both West and his slate of Arizona electors (for the electoral college) were registered Republicans. (After the case was filed on Monday, the electors re-registered as independents on Tuesday.) West is attempting to qualify for the Arizona ballot under a procedure for "any qualified elector who is not a registered member of a political party that is recognized". (A.R.S. 16-341(A). (The reason it limits persons from recognized parties is because those persons already have the opportunity to run in the Republican - or, Democratic - primary election.)
Plaintiff's counsel Joseph Roth and Josh Bendor (from the Arizona law firm of Osborn Maledon) told McCoy that Arizona's ballot access laws properly are designed to "avoid this kind of late stage chaos" and that allowing him on the ballot at this point would be "confusing to voters, unfair to voters."
Timothy Berg (from Fennemore Craig), representing the slate of West electors, countered that the term "qualified elector" in the statute only applies to Arizona residents and not to Presidential candidates from other states.
*
*"AZ Law" includes articles, commentaries and updates about opinions from the Arizona Supreme Court, U.S. Supreme Court, as well as trial and appellate courts, etc.

The Arizona Supreme Court today determined that an Arizona law that makes it a felony for an individual to engage in threatening or intimidating behavior simply because the person is a member of a criminal street gang. Threatening/intimidating is normally a misdemeanor.

The Court did not consider the First Amendment aspects of belonging to a group. Rather, the Justices unanimously found that such an automatic bump from misdemeanor to felony violates the defendant's constitutional due process rights.

The Opinion vacates the Court of Appeals decision, but affirms the Maricopa County Superior Court Judge's decision. The case involved two incidents in 2017 where Christopher Arevalo threatened convenience store employees by pretending he had a gun, and threatened police officers one month later. The Maricopa County Attorney's Office prosecuted him for felonies, but did not allege that there was a connection between the threats and his gang affiliation.

Justice John R. Lopez IV wrote for the Court, and determined that "(w)e cannot, and will not, rewrite the statute to save it." He provided a clear example for why Arizona's statute violates due process.

We hold that § 13-1202(B)(2) violates Scales’ due process standard because it enhances criminal penalties based solely on gang status without a sufficient nexus between gang membership and the underlying crime of threatening or intimidating. Indeed, it permits sentencing enhancement based on gang status even if the crime is wholly unrelated to a defendant's gang membership. An example is illustrative. Assume a teenager is, unbeknownst to his mother, a gang member. In the midst of a domestic disturbance, he threatens to strike his mother and is subsequently charged with threatening or intimidating. Under the State’s argument and the court of appeals’ reasoning, the defendant would be subject to a (B)(2) sentencing enhancement for gang membership even though his mother was unaware of his affiliation, he never invoked it to bolster his threat, and the crime was altogether unrelated to his gang activity. And even if the mother knew of her son’s gang membership, the State would not have to prove that knowledge or otherwise relate his membership to the offense to invoke (B)(2)’s enhancement. By its terms, § 13-1202(B)(2) permits sentencing enhancement absent any nexus between gang membership and the crime.

The Court also considered what it calls an "expansive definition" of "criminal street gang."

Justice Clint Bolick, joined by retired Justice John Pelander (sitting in because Justice Bill Montgomery had to recuse himself), took the opporunity to write about trying to get rid of the prevalent judicial presumption that statutes are constitutional. 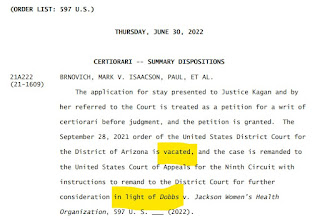