In a unanimous 7-0 opinion today, the Arizona Supreme Court ruled that hashish and other resin-based products ARE covered by Arizona's medical marijuana law. The ruling smoked all of Yavapai County's arguments that the conviction and sentence they against Rodney Jones should not be reversed.

Former Sheriff Joe Arpaio is accusing a group of Democratic Congress members of filing a "sham" pleading, and has asked 9th Circuit judges to sanction the Representatives. The 17 members of Congress filed an amicus brief opposing Arpaio's effort to use his Presidential pardon to wipe out his criminal conviction for contempt of court. 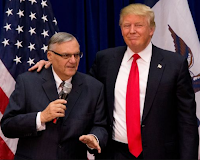 The U.S. Supreme Court declined to hear the long-time Maricopa County Sheriff's request to remove a special prosecutor appointed by the court to argue that Donald Trump's 2017 pardon of friend/supporter Arpaio should not erase the trial judge's findings. The Representatives filed their "friend of the court" brief to also support that argument.

The amicus brief argues that the judicial branch has the right to protect its right to impose criminal contempt of court penalties as a form of "self-protection", noting that Congress has similar rights. It notes that a Presidential pardon is only appropriate in a contempt of court situation if the penalty was "too harsh" or was an "evident mistake".

Arpaio attempts to argue that the Representatives and their attorneys knew or should have known that the President's power to pardon is absolute and that neither Congress nor the Judiciary can interfere with it.

Both briefs cite Supreme Court cases going back to the mid-1800s as part of their legitimate arguments. However, Arpaio believes that the Representatives' amicus brief is so "frivolous" that it warrants a rare imposition of sanctions. (It would be even more rare against the filers of an amicus brief.)

The pardon appeal itself is being handled by Arizona attorneys Dennis and Jack Wilenchik and Mark Goldman. However, for this latest go-for-sanctions move, Arpaio has enlisted the nationally-known Larry Klayman to pursue the members of Congress. Klayman is also handling Arpaio's defamation claims against the New York Times, CNN and other media outlets, which are currently awaiting rulings on multiple motions to dismiss.

Arizona Reps. Raul Grijalva and Ruben Gallego are among the two dozen Representatives who signed on to the amicus brief. We have requested reaction and will supplement as needed.

Here are the relevant pleadings from both the Congressional amici and Arpaio. You are encouraged to join the discussion in the comments below.