Gosar/Finchem/Kern To Appeals Court: We Shouldn't Have To Pay $75,000 Sanctions Because The First Amendment Was Her Defense (READ Brief)

Rep. Paul Gosar, new State Senator Anthony Kern and defeated Secretary of State candidate Mark Finchem have asked the Court of Appeals to reverse the $75,000 in sanctions they are liable for to former colleague Charlene Fernandez for a case involving their January 6 involvement. 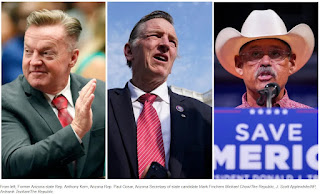 Yuma County Superior Court Judge Levi Gunderson blasted the three amigos defamation lawsuit in his August Order (below). In their Opening Brief this past week (also below), the new attorneys for Finchem/Gosar/Kern tried to get the appellate panel to focus on the findings which Gunderson *declined* to include in his Order, in order to try to show how justified they were in filing the suit.

Kern/Finchem/Gosar claimed that Democrats in the State Legislature defamed them by putting out both a public statement and open letter to the FBI in January 2021, decrying the three Republicans' involvement in the January 6 events at the U.S. Capitol. They filed against then-Rep. Fernandez, but not the other Democrats who signed on. The new brief claims she had a "personal animus" against Finchem.

One of the legal arguments the trio make in the new Brief is that Judge Gunderson committed a reversible error in dismissing the case and then sanctioning them for filing a harassing lawsuit. The lawsuit was fine, the argument goes; it was Fernandez's First Amendment defense that made it dismissable. Do not sanction us for that! (In legalese: " Filing a lawsuit is not sanctionable merely because an opponent advances a dispositive and ultimately successful defense.")

(It should be noted that the three are using appellate attorneys from Broening Oberg, and not the attorneys who brought the case  which prompted the sanctions. The latter group included Bryan Blehm, who is representing Kari Lake in her Election Contest appeal.)

Finchem and/or his attorneys are also facing sanctions for two other quickly-dismissed lawsuits which he filed last year. Arizona's Law will be updating its much-watched "Sanctions Scoreboard" with all of the updates this coming week.

AZ Law airs on non-profit Sun Sounds of Arizona, a statewide reading service that provides audio access to printed material for people who cannot hold or read print material due to a disability. If you know someone who could benefit from this 24/7 service, please let them know about member-supported Sun Sounds. And, YOU can donate or listen here.
Previous episodes of AZ Law can be streamed or downloaded here, or wherever you get your podcasts.
at January 21, 2023