Of course, the legal developments in the election audit world did not take the weekend off, and are starting off early on Monday. Let's run them down:

1) The Court has corrected itself. Tomorrow's hearing in front of Judge Martin will be a "return hearing" - more like a status, where-do-we-go-from-here type, hearing. It was previously announced that it would be an "evidentiary hearing".

1) Judge Daniel Martin, assigned to this case earlier today, has set an 11am evidentiary hearing tomorrow (Tuesday), according to KPNX's Brahm Resnik. The Court has now confirmed this.

FYI, an "evidentiary hearing" is more substantive than a "status hearing". It would not have been surprising for a new judge on the case to have set the latter.

1) As of 9:50: We now have confirmation that Judge Daniel Martin now has the case in Superior Court, and that the 11am hearing is vacated. It is expected that he will set a hearing for either later today or tomorrow to set a new schedule.

1) We are waiting to see if the new SUPERIOR Court judge keeps the 11am hearing that was set by Judge Coury, or needs more time to review the filings and sets a new time and/or date. Heck, we have not yet - as of 9:30am - received word of who the new judge will be. 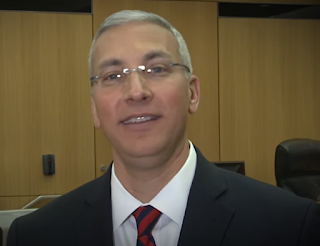 2) The new judge was needed because Judge Coury suddenly recused himself Sunday night. A former extern of his appeared in the Sunday afternoon filing, which Coury declared to require his recusal. Chris Viskovic is a new associate attorney for Alexander Kolodin, representing Cyber Ninjas. He appeared on Friday at the Supreme Court's hearing, but not officially in the Superior Court case until yesterday.

3) The Senate defendants moved to dismiss the case yesterday. (Pleading below.) The other parties also filed their memoranda, with the Cyber Ninjas asking (again) that everything be filed under seal. (Supreme Court Justice Clint Bolick rejected that request on Friday.) 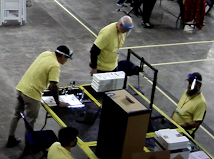 4) Staci Burk has moved to intervene in this case. Ms. Burk filed her own unsuccessful election challenge last year, and the U.S. Supreme Court is expected to deny her Petition for review next week.

(Check back throughout the day for more updates.)

AZ Law airs on non-profit Sun Sounds of Arizona, a statewide reading service that provides audio access to printed material for people who cannot hold or read print material due to a disability. If you know someone who could benefit from this 24/7 service, please let them know about member-supported Sun Sounds. And, YOU can donate or listen here.
Previous episodes of AZ Law can be streamed or downloaded here, or wherever you get your podcast.
at April 26, 2021