UPDATE, 12/28, 5pm: The attorneys for Secretary of State-Elect Adrian Fontes are asking the Court to sanction Mark Finchem and his ready-to-be-disbarred attorney, Dan McCauley. They ask the Court to force them to repay their attorneys' fees and a $5,000 penalty, under Arizona statutes and the court's Rule 11.

The attorneys' fees application is not attached to the Motion - a common procedure. Judge Melissa Julian dismissed the case before it went to an evidentiary hearing, finding that the Election Contest Petition did not allege facts which could cause the election results to be overturned. 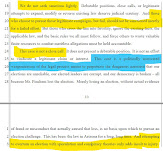 Craig Morgan, Fontes' attorney, writes that "This case is not a close call. It does not present a debatable position. It is not an effort to vindicate a legitimate claim or interest. This case is a politically motivated weaponization of the legal process meant to perpetuate the dangerous narrative that our elections are unreliable, our elected leaders are corrupt, and our democracy is broken – all because Mr. Finchem lost the election."

Finchem has filed a Notice of Appeal of Judge Julian's dismissal.

UPDATE, 12/26, 12:45pm: Mark Finchem filed the appeal of his dismissed Election Contest directly with the Arizona Supreme Court. As noted below, although there is no statutory provision for a direct appeal of an election contest case, either party can request a leapfrog of the intermediate Court of Appeals level, or the AZ Supreme Court can grab the case if it believes it to be advisable.

UPDATE, 12/22, 10pm: Because why not? Because the attorney's old and ready to retire or be disbarred - whichever comes first? Because it is a fundraising opportunity? Because all of the above?

Mark Finchem filed a Notice of Appeal, seeking to overturn last Friday's dismissal of his Election Contest in the Secretary of State race and/or the invitation to the Defendants to seek sanctions against Finchem and his attorney.

Finchem's attorney, Dan McCauley, filed the Notice. McCauley is the attorney who ended his oral arguments by acknowledging that he might get disbarred for filing the legal action but that it was okay because he is old and ready to stop practicing law. This appeal might get him closer to that outcome.

Although the appeal will initially be to the intermediate Court of Appeals, it will likely end up with the Arizona Supreme Court later this week. Because the transition of power from one of the defendants to the other - current Secretary of State Katie Hobbs (a defendant in her official capacity) to Secretary-Elect Adrian Fontes - is set for immediately after New Year's, the case will be expedited. (That might also cause the court to consider the five days between the dismissal and the filing of the Notice as dilatory.

LIVE-TWEETING incoming at 10am.

We will be covering the oral arguments in the @RealMarkFinchem Election Contest lawsuit. The Motions to Dismiss filed by the Defts will be the focus.

If granted by Hon. Melissa Julian, case is over. If not granted, evidentiary hrg next week. pic.twitter.com/5gCk3xwwKx

"AZ Law" includes articles, commentaries and updates about opinions from the Arizona Supreme Court, U.S. Supreme Court, as well as trial and appellate courts, etc. AZ Law is founded by Phoenix attorney Paul Weich, and joins Arizona's Politics on the internet.
AZ Law airs on non-profit Sun Sounds of Arizona, a statewide reading service that provides audio access to printed material for people who cannot hold or read print material due to a disability. If you know someone who could benefit from this 24/7 service, please let them know about member-supported Sun Sounds. And, YOU can donate or listen here.
Previous episodes of AZ Law can be streamed or downloaded here, or wherever you get your podcasts.
at December 16, 2022