The U.S. Department of Justice has filed a Motion to Dismiss the original claims made by Arizona Attorney General Mark Brnovich against the so-called vaccine "mandate". 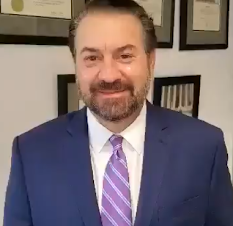 You may recall that Brnovich rushed to be the first AG in the nation to challenge President Biden's September announcement of a vaccinate or test requirement. He achieved that first in the nation status by arguing that there is no vaccine requirement for "unauthorized aliens", so to (kind of) impose such a requirement on U.S. citizens is a sort of reverse discrimination and violates the 14th Amendment's Equal Protection Clause. (And, therefore, the action is subject to "strict scrutiny".)

The case, in front of a Trump-nominated judge (Mike Liburdi), has floundered ever since, even as the Attorney General has filed the Third Amended Complaint and added various plaintiffs.

Monday's Motion to Dismiss is only as to the original unauthorized aliens claims. Those claims dropped the Equal Protection aspects and now focus only on the releasing of the noncitizens pending court hearings. The DOJ claims that Brnovich "misreads the law" and that "Arizona’s claims are non-justiciable and without merit. Arizona’s claims must be dismissed because Arizona lacks standing, some of its claims are moot, and the actions it challenges are committed to agency discretion, not final agency action, and precluded from review by statute. Arizona also lacks a cognizable cause of action to enforce the INA, and its immigration claims fail on the merits."

The Attorney General's Office has already agreed to a standard briefing schedule on the Motion, meaning a decision on Arizona's first in the nation case will not take happen before late February. Brnovich has since turned most of his attention to cases started by other states, in which he has joined. Two of those will be taken up by the Supreme Court on Friday.

Brnovich is running for the U.S. Senate seat held by Mark Kelly.

AZ Law airs on non-profit Sun Sounds of Arizona, a statewide reading service that provides audio access to printed material for people who cannot hold or read print material due to a disability. If you know someone who could benefit from this 24/7 service, please let them know about member-supported Sun Sounds. And, YOU can donate or listen here.
Previous episodes of AZ Law can be streamed or downloaded here, or wherever you get your podcasts.
at January 04, 2022

While the Arizona State Senate is again appealing another Order to turn over records related to the election "audit", they warned ...