The election "audit" masterminds received a hard one-two combination today in the State Senate's ongoing battle to not turn over public records related to the process. Plaintiff American Oversight noticed out the deposition of head Cyber Ninja Doug Logan, for January 5. And, the judge also added Cyber Ninjas as a defendant in the lawsuit. 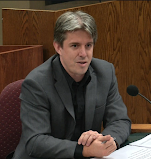 Logan will be videotaped for the deposition, although he does not need to come back to Phoenix for it.
And, Superior Court Judge Michael Kemp agreed with attorneys for both AO and the State Senate that Cyber Ninjas should be added to the lawsuit as a real party in interest. This traces back to the apparent rift between State Senate President Karen Fann and Logan, as the parties are at risk of being held in contempt of court for not turning over key documents.
Cyber Ninjas had asked to only participate in the case as an Amicus - a "friend of the court". Judge Kemp was not pleased with the attorney's (Jack Wilenchik's) request, given that he had already considered and ruled on the issues Wilenchik proposed to raise - "that records in the
possession of CNI that have a substantial nexus to the audit are public records that must be
disclosed. CNI asks this Court to reverse a holding after special action relief was denied on August 19, 2021, on these same issues." Kemp notes that the Court of Appeals again denied those arguments last month, and that the Ninjas are simply an agent of the State Senate (and are thus not an independent party).
(h/t to my friend @Modernista64)

AZ Law airs on non-profit Sun Sounds of Arizona, a statewide reading service that provides audio access to printed material for people who cannot hold or read print material due to a disability. If you know someone who could benefit from this 24/7 service, please let them know about member-supported Sun Sounds. And, YOU can donate or listen here.
Previous episodes of AZ Law can be streamed or downloaded here, or wherever you get your podcasts.
at December 16, 2021