Former Arizona Corporation Commissioner Bob Burns got an early Christmas gift from the Arizona Supreme Court today. The Court decided that they will take a look at his long-ago and long-running battle to subpoena APS and its parent company to divulge information about their extensive dark money political contributions in 2014.

While Burns is no longer a Commissioner and APS was separately forced to turn over many of the documents, today's agreement by the Court to consider some of the issues is an (interim) victory for Burns. He is specifically fighting for the right of future Commissioners to exercise investigatory powers even if other members of the five-member Commission oppose it.

Burns has waged this battle against both the utility and his then-fellow Commissioners since 2016, after APS/Pinnacle West had apparently secretly funneled millions of dollars to front groups and consultants in 2014 to elect its preferred candidates to the Commission which regulates them; more accurately, the nasty dark money campaign was more opposed to candidates the utility apparently feared. 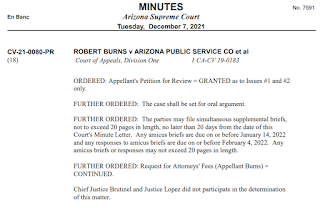 The Supreme Court today decided it would not look into Burns' argument that he had the right to investigate whether his fellow Commissioners should have had to recuse themselves from rate-setting procedures involving the state's largest utility.

Briefing will take the next couple of months and oral argument will be scheduled. Below are Burns' Petition for Review and the Responses from both APS and the ACC.