BREAKING: Largely "Unconstitutional" - Arizona Supreme Court Sets Up Education Funding Portion Of Invest In Ed Initiative To Be Knocked Down

UPDATE, 8/19 at 10:15am: The Invest In Ed initiative passed by Arizona voters last year to provide additional funding for education via a tax surcharge on wealthiest taxpayers is largely unconstitutional. The Opinion handed down by a 6-1 majority of the Arizona Supreme Court this morning holds that the initiative cannot get around expenditure limitations in the Constitution. Therefore, revenues raised may largely remain un-spendable.
The majority opinion is written by Chief Justice Robert Brutinel noted that the tax surcharge will currently remain in place: "However, because we cannot determine at this preliminary stage of the case the extent to which, if any, such funding will exceed the constitutional expenditure limitation, we
decline to enjoin the imposition of the tax pending further proceedings in the trial court."
So, the Supreme Court has handed it back to the trial court to make that determination based on the restrictions it set forth.
The majority determines that the severability clause - a common provision that suggests that if one portion of a law runs afoul of the Constitution that the remaining parts remain in place - does not save Prop. 208. "However, the act intended to drastically increase education spending, which cannot be done without the invalid provision. Consequently, the severability clause does not save Prop. 208."
Vice Chief Justice Ann Timmer dissented from that part of the decision, stating that the majority set up a test which was not asked for by the plaintiffs nor justified.

Would voters have enacted Prop. 208 had they known that a material amount of generated tax funds could languish in state accounts unless excess expenditures were authorized? Maybe, maybe not. Perhaps they were willing to risk having Prop. 208 “lurch along,” counting on the legislature to authorize exceeding the expenditure cap and avoid needlessly accumulating “hundreds of millions of dollars in unspent revenues.” Perhaps not. But there is no vehicle for making such inquiries because Fann has not shown that the transfer and allocation provisions are facially unconstitutional, which would prompt a severability analysis under Randolph. The likelihood of successful as-applied challenges should not be used as a backdoor pathway for declaring an entire initiative unconstitutional and void.

The Arizona Free Enterprise Club is one of the plaintiffs in this lawsuit (and is likely the funding party). AZFEC President Scot Mussi celebrated today's decision in a statement to Arizona's Law/Arizona's Politics, already referring to Invest In Ed in the past tense:

"This was a great win for taxpayers, small business and the rule of law. Prop 208 was a poorly drafted measure that would have caused severe damage to Arizona's economy. We are looking forward to the trial court determining that the law exceeds the constitutional expenditure limitation and officially strikes down the measure."

On the other side, Save Our Schools called the decision "an affront to our right to self-governance" and stated that the referenda petitions they and Invest In Arizona are circulating to stop three of the Legislature's efforts to un-do Prop. 208 are more important than before to avoid "the twin blows of that lss and the impending loss of another $1B per year due to the legislature's massive tax cuts." 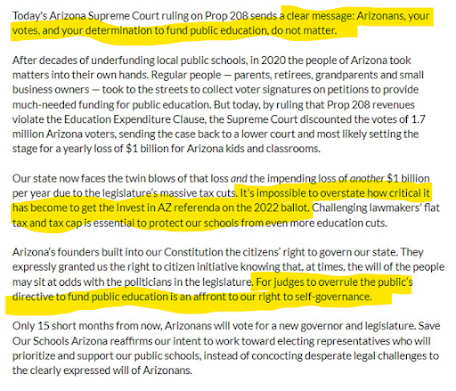 Another interesting aspect of this is whether those bills passed by the Legislature this year will actually change the outcome of the test ordered today by the Supreme Court.
(This is a developing story. Please check back for the Opinion, updates, etc.)
Original article, 8/18: Long-Awaited Arizona Supreme Court Opinion On Invest In Ed's Constitutionality Released Tomorrow
On April 20, the Arizona Supreme Court held oral arguments on the constitutionality of the Invest In Ed tax surcharge to help fund education. Tomorrow, the Court will deliver its Opinion on that controversial subject.
This case challenges the initiative that was passed by voters last November. This is not to be confused with the many lawsuits and actions that have taken place on the subject since the oral arguments. The Legislature passed three laws to un-do the effects of the surcharge on the wealthiest taxpayers, the Invest In Ed proponents began collecting referendum petition signatures to stop those laws and both sides have filed lawsuits.
If the Arizona Supreme Court Justices rule tomorrow that the original initiative was defective because of the state Constitution's expenditure limitations - meaning the monies raised by Invest In Ed could not be properly spent - most or all of that April through August activity will have been for naught.
The April 20 arguments were fascinating to watch - largely because the central issue was quite different from the arguments the Arizona Free Enterprise Club, State Senate President Karen Fann and the other plaintiffs had initially emphasized in their case.
Plaintiffs now argue that Invest In Ed could not "exempt itself" from the expenditure limitations (Art. IX, sxn 21) and that voters would not have passed the measure if they knew most of the collected funds would not be able to be spent right away.

AZ Law airs on non-profit Sun Sounds of Arizona, a statewide reading service that provides audio access to printed material for people who cannot hold or read print material due to a disability. If you know someone who could benefit from this 24/7 service, please let them know about member-supported Sun Sounds. And, YOU can donate or listen here.
Previous episodes of AZ Law can be streamed or downloaded here, or wherever you get your podcast.
at August 18, 2021