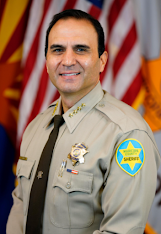 Sheriff Paul Penzone will likely be on the hot seat in August, although Snow gave his attorney a week to confer with the other parties and see if they can agree on limiting the scope of the hearing. The Sheriff could concede the substantive part of the claims from the ACLU and the USDOJ about the department taking way too long to conduct internal investigations, and focus on the methodologies for improving the system. (Two to three months is required, but the MCSO is averaging 550 days.)

Judge Snow told counsel that he found the MCSO's defenses "unpersuasive", which helped prompt attorney Mary O'Grady's request for the week. One attorney opposed the meet and confer week, but Judge Snow rejected that.

Much of the hearing had focused on the discovery that the plaintiffs would be permitted to take of the MCSO's experts before the OSC hearing.

This case was filed in 2007 by the ACLU (as Melendrez v MCSO/Arpaio), focusing on Sheriff's deputies targeting Hispanic drivers. There has been a long-running court-appointed Monitor involved in overseeing County efforts to remedy such issues.

The case drew the most national attention when former Sheriff Joe Arpaio was found in contempt of court for disregarding Court orders in the case. That resulted in former President Donald Trump offering Arpaio his first Presidential pardon in 2017.

The next few months should determine whether a second successive Sheriff is subject to a contempt finding. (Penzone defeated Arpaio in 2016 and was the only countywide Democrat to win (re)election last year.)

Previous episodes of AZ Law can be streamed or downloaded here, or wherever you get your podcast.