The Arizona Supreme Court today unanimously tossed a law capping the amount of restitution that an accident victim can receive. The unconstitutional law was passed in 2006 to limit restitution to only $10,000*, although the Victims' Bill of Rights - passed by voters and added to the Arizona Constitution - calls for "prompt restitution". 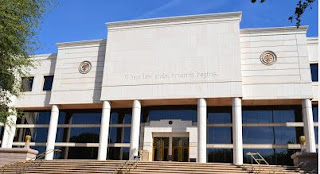 In this case before the Court, the accident victim's damages were more than $160,000. Phoenix Municipal Court awarded full restitution, but it was overturned by Superior Court. The Court of Appeals reinstated the full award based on the constitutional argument.

The Supreme Court unanimously decided today that the trial judge - and the Court of Appeals - had it right. The VBR is in the Constitution and that trumps the cap placed on it by the Legislature. (The bill was sponsored by now-Congressman Andy Biggs and former Senator (and later, Superintendent of Public Instruction) John Huppenthal had offered the cap idea.)

Justice Bill Montgomery authored the opinion for the 6-0 majority, noting that Arizona voters certainly intended the "prompt restitution" to full compensate the victim.

The scope of restitution afforded to victims when the VBR was considered supports this conclusion. At the time voters approved the VBR, victims were clearly entitled to full restitution. A.R.S. § 13-603(C) (providing that “the court shall require the convicted person to make restitution . . . in the full amount of the economic loss as determined by the court”). And just as we presume that the legislature is aware of the law when it enacts a statute, we presume voters are as well.**

Getting rid of the cap was appealed by the Phoenix prosecutors and the Attorney General's Office, the Arizona Crime Victim Rights Law Group and National Crime Victim Law Institute all argued in favor of today's decision.

Attorney Randall Udelman represented the latter two groups and tells Arizona's Law that today's decision "reinforced the notion that a victim of crime may recover the full amount of their economic loss whether or not the choice of weapon to further their crime was a gun, a fist, a knife or a car." He added that it "advances the constitutional goals spelled out in the Crime Victim Bill of Rights passed by Arizona voters thirty-one years ago.

**This principle may also come into play in a case currently before the Arizona Supreme Court over the details of the successful 2020 initiative known as Invest In Ed.