A Gilbert police dog and his officer should receive qualified immunity from an excessive force claim, after biting a recalcitrant drunk driver. That was the opinion of 9th Circuit judges this week. 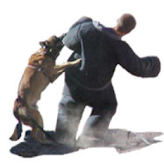 Murphy (a Dutch Shepherd who has since retired*) was ordered to bite Scott Hernandez only after the intoxicated driver failed to immediately pull over, had resisted getting out of his car and officers had gradually (tugging, pepper spraying, etc) escalated their efforts. Murphy did not try to pull Hernandez out of the car, and the driver continued to resist even after Murphy had held on to his arm for 50 seconds before releasing (upon command).

The 9th Circuit panel unanimously affirmed Judge Susan Brnovich's decision granting Murphy's officer qualified immunity. The 15-page opinion details the interaction that led to Hernandez's excessive force claim against the town of Gilbert and Officer Gilbert**, and then analyzes how the plaintiff could be successful: "To defeat qualified immunity, Hernandez must show that the state of the law as of May 5, 2016, gave a reasonable officer “fair warning” that using a police dog on a noncompliant suspect, who had resisted lesser methods of force to complete his arrest, was unconstitutional."

Although Judge Richard Tallman - writing for a panel which included Bridget Bade of Arizona - searched hard for a case "on all fours", the facts in this case were slightly different from previous 9th Circuit decisions. They found that the officers had been reasonable, given Hernandez's repeated refusals to comply.

Not only did Tallman drop in the "on all fours" legal term, but without comment noted that the chain of events had begun with Hernandez sharing too many drinks at the local saloon. It is unlikely that Hernandez could imagine ending up in front of the 9th Circuit when he was with his friends at the (now closed) Mad Dog Saloon.

*We have not yet received confirmation that the retirement was not related to this relatively benign incident.

AZ Law airs on non-profit Sun Sounds of Arizona, a statewide reading service that provides audio access to printed material for people who cannot hold or read print material due to a disability. If you know someone who could benefit from this 24/7 service, please let them know about member-supported Sun Sounds. And, YOU can donate or listen here.
Previous episodes of AZ Law can be streamed or downloaded here, or wherever you get your podcasts.
at March 09, 2021

UPDATE, 4/8 at 2:30pm: The AG's office informed the court this afternoon that they have, in fact, completed service of the Complaint upo...