Oral argument in the court case filed last month by the County Board of Supervisors pushing to declare the original subpoenas unlawful was scheduled for this morning, but was vacated at the last minute by Fann's attorneys. The Supervisors were also set to meet in Executive Session this morning, but that was also vacated. Gallardo indicates that the latter might be rescheduled for Friday.

He tells Arizona's Law that "we agreed to come together and talk about how an audit might be done", but that a straight turnover of all of the requested items to the Legislature was NOT a viable option. He suggested that an independent third party or one appointed by the Court would be more likely to receive approval from a majority of the five-member Board of Supervisors.

Indeed, at 3:50pm this afternoon, the County released a statement saying that negotiations continue. Here is the complete statement, credited to new Board Chair Jack Sellers:

The Board of Supervisors through its legal team continues to negotiate in good faith with the representatives of the Arizona State Senate President.  This Board is being updated as negotiations continue on the terms of a potential agreement.  The parties are working toward an agreement which delivers some of the requested documents and information while protecting voter privacy and the integrity of election equipment.  We look forward to reaching consensus on these matters.

This Board has always been consistent in supporting a forensic audit and will continue to take steps toward that end. Members are actively working with stakeholders, including the Recorder, and hope to have an audit completed soon.

Earlier today, Fann released a statement (below) saying that "not only has the Board agreed to turn over all the relevant information we sought in our subpoenas so that we may perform an audit, but they also acknowledge that the Legislature is a sovereign power of the state and that they county is a political subdivision, and as such, the Legislature has the constitutional and statutory authority to issue subpoenas."

At about the same time, Sellers did release a letter agreeing to the latter part of that statement, but not about a turnover of the ballots, machinery, etc. 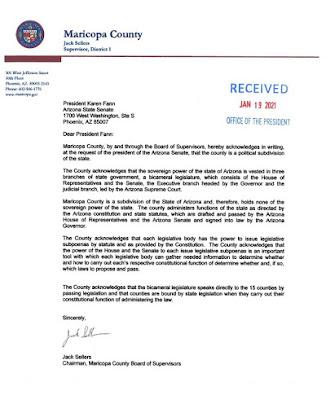 This is a developing story. Please check back for more information.

AZ Law airs on non-profit Sun Sounds of Arizona, a statewide reading service that provides audio access to printed material for people who cannot hold or read print material due to a disability. If you know someone who could benefit from this 24/7 service, please let them know about member-supported Sun Sounds. And, YOU can donate or listen here.
Previous episodes of AZ Law can be streamed or downloaded here, or wherever you get your podcast.
at January 20, 2021

The Arizona Supreme Court handed down a unanimous decision today affirming that a Gila County Sheriff's Deputy forced to retire because ...