The Arizona Supreme Court decided today that the Netherlands CAN enforce its $7.1M dollar judgment against Mesa's MD Helicopters here in Arizona. 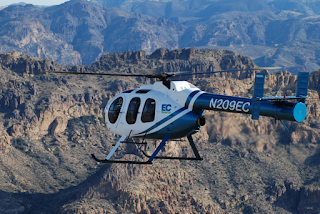 The justices split 5-2 on whether Arizona's recent law permitting the domestication and enforcement of foreign money judgments in Arizona requires the nation to have a reciprocal law passed by its legislature, or whether nearly 100 years of court decisions and practice sufficed.

Coincidentally - or, perhaps not(?) - that was just after Arizona changed its laws on recognizing such foreign judgments, enacting its version of the Foreign-Country Money Judgments Recognition Act. It requires that the country had “adopted or enacted a reciprocal law related to foreign-country money judgments that is similar" to the law.

So, the question before Arizona's Supreme Court was what is the meaning of "a reciprocal law". And, Vice Chief Justice Ann Timmer, writing for the 5-2 majority, found that the word "adopted" indicates Arizona's legislature was looking to more than simply laws "enacted" by a legislative body, that the Legislature did not limit the reciprocity to "laws" and that it was concerned with how Arizona judgments would be treated in that nation.

Justices Bill Montgomery and Clint Bolick dissented, suggesting that the Netherlands Supreme Court itself has described its reciprocity as "disguised", because the Arizona judgment would only be "recognized" there but could not be "enforced".

Arizona's Law has reached out to MD Helicopters for reaction to today's decision and will update as warranted.