Arizona Senators Martha McSally and Kyrsten Sinema are proposing five new federal judgeships for Arizona, citing our "expanding population" and a "judicial emergency". If their new bill became law, the state would jump from 12 District Court judges - plus one temporary judgeship - to 17 permanent spots on the bench; that would be a 42% increase.

Arizona's caseload, as reported in the Conference's recommendations, do constitute what they define as a "judicial emergency". However, seven District Courts have more "weighted filings" per existing judgeship, and New Jersey, Delaware and Indiana's Southern District have a significantly larger 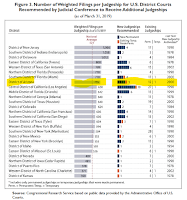 The federal bench has not been increased by Congress (and the President) since George W. Bush was President. (Arizona was among the last batch of new judgeships.)

Senators McSally and Sinema have already helped nominate two replacement judges to Arizona's District Court bench. Judge Scott Rash is awaiting a vote from the Senate and Judge John Hinderaker is waiting for the Judiciary Committee to forward his nomination.

“Arizona is one of the fastest growing states in the nation," said Sinema. McSally added that "our federal judges are burdened with heavy caseloads that hinder their ability to effectively do their jobs.” She also suggested it would help "address crime and illegal immigration."

The bill (text below) does not have a companion bill introduced in the House, and it would need to be approved by both the House and Senate for the President to leap at the opportunity to sign it and nominate the new judges. That is unlikely to happen without the other overloaded states, or in an election year (with split control of the houses of Congress).