An October 14 trial has been set for the terrorism and assault charges against 18-year old Ismail Hamed. Maricopa County Superior Court Judge Sally Schneider Duncan also ordered the release of more documents from the Maricopa County Sheriff's Office investigation; those previously-sealed reams of documents were released this afternoon. 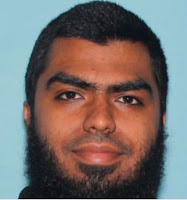 Hamed is charged with assisting ISIS by spreading its propaganda. On January 7, 2019, he allegedly called 911 and swore allegiance to ISIS. He followed this by pulling a knife on an MCSO sergeant and hitting him with rocks. During the confrontation, Hamed was shot twice after following the sergeant back to the patrol truck.

The newly released documents include the grand jury indictment, search warrants, and the incident report including copies of text messages between Hamed and a friend discussing ISIS-supportive videos (and more).

The October trial date was set at a pretrial conference held on Tuesday.
at June 14, 2019

In this installment of "AZ Law", we feature our interview with Arizona Supreme Court Chief Justice Robert Brutinel, along with ar...